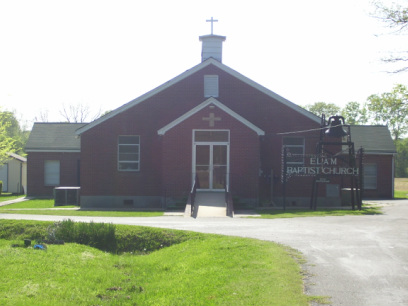 History of Elam Elam Missionary Baptist Church located at 3543 Durhamville Road, Ripley, TN was organized in 1869 by Rev. Harden Smith. In 1870, a local Lauderdale Countian named Mr. Thomas A. Anthony deeded a plot of land to the deacons and their successors to build a church. Rev. Smith served as pastor for more than thirty(30) years with worship service held on the first and third Sunday of each month.

Rev. A. Voss was elected in 1934. He served a short term only a couple of months. In August, 1934, Rev. Williams Burrow was elected pastor. He organized the first Trustee Board and additional auxiliaries that were commonly found in the Baptist Church organizational chart. He was effective in teaching, training and supervising members in their duties and responsibilities. He served for almost twenty-five (25) years. Under his leadership in 1954, a new brick church was erected.

In the fall of 1959, Rev. W.L. Lindsey was elected. Under his pastorate, an addition was added to the church.

In May, 1969, Rev. Douglas L. Malone was elected as pastor. He served for twenty-six (26) years, retiring in December, 1995. During his leadership, full time service was initiated and Vacation Bible School began, the addition of two rooms was made to the interior, carpet was installed, a church steeple was erected, a church sign was added, padded pews were installed, central heating and air-conditioning was installed and an organ was purchased.

In December, 2003, Rev. Iran D. Yarbrough was elected as  pastor. A young energetic, preacher, teacher, and talented singer. Under his leadership, and with the theme - "Delayed but not Denied - We are One. " The cemetery land was paid, a drum set was purchased, the membership and financial contributions increased, new ministries were established and the church was incorporated. With his vision of a new church, the building fund increased and land was purchased in 2006 on the corner of Highway 19 and Durhamville Road. A ground breaking service was held in May, 2008 and construction of the new home began in June, 2008. At the present time, we have moved into our new church home at 46 Durhamville Road, Ripley, TN. To God Be the Glory!